Women-in-Horror Month closes with this double review. Please, support – or continue to support – the truly amazing women who are working in this bountiful field of darkness.

Nadia Bulkin was literally my first real introduction to modern horror. I’ll ramble on about this in my discussion of “Red Goat Black Goat”, but let’s just say that without that story, this blog would not exist.

One the most unique, original, and horrifying voices in the community, Bulkin inextricably entwines ominous forces with society, resulting in a subgenre of the Weird unique unto itself – what she terms socio-political horror. With a strongly feminist viewpoint reminiscent of Livia Llewellyn, a stunning eye for local detail and character, and an almost upsetting knack for hitting just the right points of wrongness in her otherworldly antagonists, Bulkin is certainly one of the very best writers working in the Weird Renaissance.

Please allow me a brief moment of nostalgia.

A couple of years ago, I was avidly diving into the classics of horror fiction. Poe. Lovecraft. Dracula. I was quite obsessed with The Phantom of the Opera. Old monster movies. Mythos stories. I was pumping out terrible Lovecraft pastiches like a machine (I revisited a few of these latter recently. They are truly awful. I cringed several times in embarrassment.).

Then I picked up Lovecraft’s Monsters.

I had seen a post about it on the Lovecraft eZine, recommending the Ellen Datlow-edited anthology. I had just discovered the Lovecraft eZine, and admittedly had not read any of its fiction yet (I’m ashamed. There are so many great stories up there.). But even I, naïve as I was, was familiar with the reputation of Ellen Datlow. So when I saw it in Barnes & Noble, I grabbed it, and started reading as soon as I could. The first story I read?

Admittedly, I was not familiar with any of the authors, and it was the stunning John Coulthart illustration (which you can see above) that captivated me. I still think that illustration is a masterpiece, one perfectly suited to the setting, style, and atmosphere of the story (particularly its Indonesian setting). They have the original over at the Lovecraft Arts & Sciences Council. I should save up for it.

Anyway, I started out on Bulkin’s story. The opening paragraph, with its detailed prose, produced a vivid image in my mind.

It had been raining for five days. The Gunawan estate, riddled with wool and dung, was rank. Its position on a hill had saved the mountain villa from the floods wracking West Java, but the moon orchids were drowning and the Mercedes was sinking in the mud. Twenty-some feral goats watched the driveway roll down the slope. Then they started to bleat, because a little human figure was slogging up the hill.

Our tale follows Ina “Kris” Krisniati, who takes a babysitting job at the Gunawan estate in the West Java Province of Indonesia. The widower Gunawan is a harsh old grump, and the children – Putri (big sister) and Agus (little brother) – seem to have taken a peculiar surrogate mother – an imaginary creature they call the Goat Nurse. As one might suspect, the Goat Nurse is far from imaginary, but this is no clichéd phantom as Hollywood would have it – instead she is an unimaginably sinister and powerful entity that descends on the Gunawan estate with the wrath of a thousand earthquakes.

The story shocked my naïve, Lovecraft-fed mind. The incredibly menacing force in this story was like nothing Lovecraft or Poe created. It was a sadistic monstrosity that could not be reasoned with or ever really understood. But far from the relatively distant and removed horrors of the Mythos, the Goat Nurse seems to go out of her way to wreak chaos and havoc and grief against the Gunawans and their nearby neighbors. Lovecraft’s Monsters identifies the creature as Shub-Niggurath, but there is a pleasant ambiguity to the Goat of the story – if you wish it to be Shub-Niggurath, it can be; if you don’t, it doesn’t have to be. I asked Nadia if she intended the dark force of her story to be Shub-Niggurath, to which she simply responded “Yes. Sort of.”, adding that she had grown out of a post-Colonial ghost story she had been told as a child – nothing Lovecraftian.

Of course, another shocking element were the fully developed characters; people I cared about and were invested in; people who, even in the throat of darkness, tried to struggle out of the slime and flesh to the light, no matter how dim it was. Again, all stories before that had really only had cardboard cut-outs for characters. But Kris, Agus, Putri, Mrs. Gunawan, even thieving workman Tono…they were people, breathing and flawed people, who were caught up in something that they tried, feebly, to understand.

The prose is also well done, with truly beautiful descriptions of Bulkin’s native country. I couldn’t imagine a better setting for the tale, to be perfectly honest – the cloudy, mountainous regions of rural Indonesia make the perfect setting for a horror tale.

After finishing the darkest story I had ever read up to that point, I put the book down for a while, and went over to the beach, walking around in a dazed, gloomy haze. I was depressed. I couldn’t help but ponder everything about the story, what it could mean about modern writers. Were there Lovecrafts and Poes working today? Were there better?

To this day “Red Goat Black Goat” remains my ideal image of what a modern weird tale can be when fully realized – unimaginably dark and scary and threatening, with beautiful prose and fully developed characters. But, besides that, I owe it more than I can ever pay  back. It introduced me to the spaces the past had never plumbed, that the present was excavating now. It was – is – an astounding story. It was my gateway to darkness. 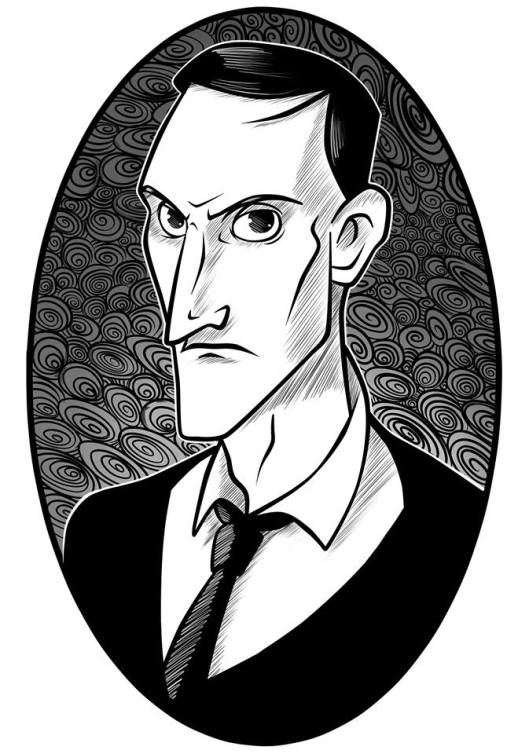 “Violet is the Color of Your Energy” can be found in the excellent anthology She Walks in Shadows, eds. Silvia Moreno-Garcia and Paula R. Stiles, which I would have reviewed for Women-in-Horror Month if I wasn’t so swamped with books. It is, at least to me, at the complete opposite pole of genius from “Red Goat Black Goat”. They are vastly different stories; but each a masterwork in their own chosen direction.

This story is, essentially, a modern retelling of H.P. Lovecraft’s “The Colour Out of Space”, and so I will refrain from giving a detailed summary as most will be familiar with the tale. But there are differences, differences entirely altering the meaning of the original. The most notable is that the tale, instead of following Ammi (in this version, Ambrose) Pierce or Nahum (Nathan) Gardner, is told from the viewpoint of Nahum’s wife, Nabby (or, in this case, Abby).

For example, why did the seemingly benevolent Ammi Pierce visit the Gardners so often? Why was Nahum Gardner so very eager to lock his wife in the attic at the first chance? Was the Colour but a hideous doom or some grisly form of liberation?

I am rather afraid of giving away too many details about this story, since you really need to experience it for yourself, but let me just say that I was very heavily reminded of one of the greatest horror masterpieces ever written – Charlotte Perkins Gilman’s “The Yellow Wallpaper”, which is scary on so many more levels than it initially appears. “Violet is the Color of Your Energy” forms a triptych with “The Yellow Wallpaper” and “The Colour Out of Space”, and – yes, I’m going there, don’t try to stop me – I personally view it as the triumph of the three. Bulkin repurposes elements of an old-fashioned tale to tell a very modern story of feminine oppression in our own day and age. It reminds me of Livia Llewellyn’s “The Last, Clean, Bright Summer” in that it could really be a very effective discussion-starter about issues many scorn.

My final statement is going to be rather difficult to articulate, but I hope to get my point across. “Violet is the Color of Your Energy” takes old material and reshapes it into something relevant to us, right here, right now. By basing it off an original source, it makes the themes clearer in an odd way, while still paying homage to two fantastic inspirations. It is dark, and it is beautiful, and it is important.

You can buy She Walks in Shadows, where “Violet is the Color of Your Energy” was originally printed, here. It is also being reprinted, quite deservingly, in the Year’s Best Weird Fiction, Vol. III. (ed. Simon Strantzas; series editor Michael Kelly), which you can (and should) check out here.

Almost done, but not quite. Those who haven’t seen the parallels I’m trying to draw between these two fantastic stories need to know what those parallels are, why these two stories work well not only seperately, but together.

“Red Goat Black Goat” is the idealistic view of what modern weird can do, what today’s writers can accomplish at their full extent. “Violet is the Color of Your Energy” is a repurposing of old classics to a new and important theme. Why do these two fit together so well?

God willing, Nadia Bulkin is going to get a collection (and God better be willing or I’m gonna punch his frickin’ face), and these two will form openers and closers (but in which order? Close with “Violet is the Color of Your Energy” if you want a happy-ish ending, and “Red Goat Black Goat” if you want the doom and destruction.), but for now, go out and read these. It’s worth the – what – thirty or so bucks that you’ll need to cough up in order to have an astounding horror experience. This won’t be the last time you’ll see Nadia Bulkin on this blog. It owes a great debt to her. In fact, I think I’ll dedicate the frickin’ thing to her. Go check the “About” page right abooooooouuuut…now.

This closes off Women-in-Horror Month for now, but do not think women authors will be continued to be celebrated on the Conqueror Weird. Sometimes it saddens me that we have to have a “month” for things, meaning they have so little recognition that somebody decided to draw attention to them, saying “Hey, uh…look over here” (that doesn’t mean I won’t continue to use “month” themes here on the Conqueror Weird. It helps with planning.). Celebrate Women-in-Horror Month whenever the hell you want. Celebrate it all the time! Celebrate the endless diversity and flow of weird fiction all year long, and be glad that such an under-appreciated genre brings together people of all backgrounds. I know I’m getting preachy, and this is going to sound soooooooo corny, but there’s only one way to describe the weird community.

(Jesus Christ. “Magical”? Did I actually right that? I’m disgusted with myself.)

Any way, join us soon on the Conqueror Weird for more reviews, interviews, and rants. I have about five in the works. It’s going to be one hell of a ride in March. Just wait till you see what I have planned for April…