“Unmanageable Spirits”
a Look at Nadia Bulkin’s “Wish You Were Here”
by S.P. Miskowski

Who doesn’t dislike tourists? With their loud clothes and their demands for special treatment, even tourists hate other tourists. But no-one regards them with more apprehension than the individual whose job it is to ferry them around and show them a good time. It’s exhausting work, for the umpteenth time recounting a location’s history and significance to people who are tuned out to all but their own personal adventure.

On any tour in almost any city you’ll find individuals who want something extra, a secret spot or a deal known only to the locals. The belief that a deeper level of experience can be purchased for the right price isn’t strictly a characteristic of people raised in the United States, but we seem to be the most gauche and relentless about it. Give us the good stuff and give it to us right now.

We don’t know how many people Dimas, the protagonist of Nadia Bulkin’s story “Wish You Were Here”, has taken on guided tours in Bali; enough to make him expert at spotting personality types and anticipating what they want. He’s quick to perceive the nature of two couples, Melissa and Josh, Rose and Ben, as he shows them the sights. They turn out to be a particularly unruly group and over the course of a few events Dimas loses them to accident, sexual misadventure, and the allure of drugs.

The one person who sticks with him has a dark purpose. Rose has come to what she thinks is a highly spiritual place in order to make contact with her son, who died in a car crash. Dimas tries to discourage her obsession. Over the course of the tour he tells a series of tales in response to the demand for ghost stories. Nothing will satisfy Rose. Her unconsciously xenophobic view of Bali centers on exoticism and ritual. She wants Dimas to perform a ceremony he learned from a family member as a child, so that she can speak to her son.

Hundreds of stories and films misinform Rose’s expectations. She seems convinced that touring a country where her skin color sets her apart as a traveler, a place where she doesn’t know the language and doesn’t care about local culture or history, she will be more in touch with the occult. She wants what she wants when she wants it.

Dimas, it turns out, is also a traveler. The life he left behind haunts him, particularly the memory of Ani, a friend killed in a fire set during the kind of social and political conflict Rose can’t even imagine. Dimas has settled in Bali to try and forget the past but he finds himself in another place of uncertainty and unrest. Everywhere he goes he thinks of Ani and the horrific way in which she died.

Once Dimas agrees to help Rose, he seals her fate and his own. I won’t spoil the disturbing nature of that fate. I’ll only note that Dimas was correct when he warned that reaching out to spirits is a very inexact process; it opens a door you can’t close again at will.

In this rich, marvelous story Nadia Bulkin accomplishes an astonishing number of things simultaneously. We have the natural beauty as well as the tawdry entertainments of a popular tourist destination. We learn about recent history through the experiences and assiduous social observations of Dimas. Above all we recognize the degree to which we are all haunted by those we’ve lost but also by the dense, violent history of each place we encounter and each person we meet. Such things are not meant to be handled, like a toy, and then put back where we found them. Death, horror, the world beyond our reason or reckoning, is not manageable; it is as powerful, as real, and as terrifying as human life itself.

S.P. Miskowski is the author of the Skillute Cycle from Omnium Press, Stag in Flight from Dim Shores, the Shirley Jackson Award-nominated Muscadines from Dunhams Manor Press, and the forthcoming novel I Wish I Was Like You. She has received two National Endowment for the Arts Fellowships and a Swarthout Award. Visit her here.

Nadia Bulkin is an Indonesian author of socio-political horror and weird fiction. Her short fiction has been nominated for the Shirley Jackson Award and her story “Wish You Were Here” (discussed in this post, and available to read online here) was reprinted in Ellen Datlow’s Best Horror of the Year Vol. 9. Her first collection, She Said Destroy, is coming from Word Horde this summer.

On the bright side I was finally welcomed into the fold of the community (I think), I had my first three stories published (two of which were illustrated!), the blog got good(ish) traffic, I went to both KrallCon and ReaderCon (both of which were amazing), we started to run Sean M. Thompson’s excellent serialized novella The Demon, the Month of Bartlett was fantastic, and on the whole it was a pretty awesome year for weird/horror fiction.

My “Best of 2016” list is somewhat half-assed and rather quickly slapped together, but I think its representative of most of the truly special stuff I read this year. Criteria:

(Christopher Ropes’ Complicity gets an honorable mention here, even though I haven’t gotten the chance to read it yet.)

(There’s a horror comic in Hot Dog Taste Test, but on the whole its humor. Nonetheless, its really, really good.)

(Full disclosure: I have been published in Ravenwood and occasionally wade through the submission slush to help out, thus making me “assistant editor”. I stand by my statements – its a good magazine.)

(BoJack Horseman is not a horror show, but it’s so damn good that it deserves to be here.)

That’s it! Happy holidays to all from the hellhole of suffering and damnation that is the Conqueror Weird. Here are some cool illustrations that were either based on my work (!!!!) or involved me in some way. Let’s hope 2017 is better!

Illustration by Richard Svensson for this blog 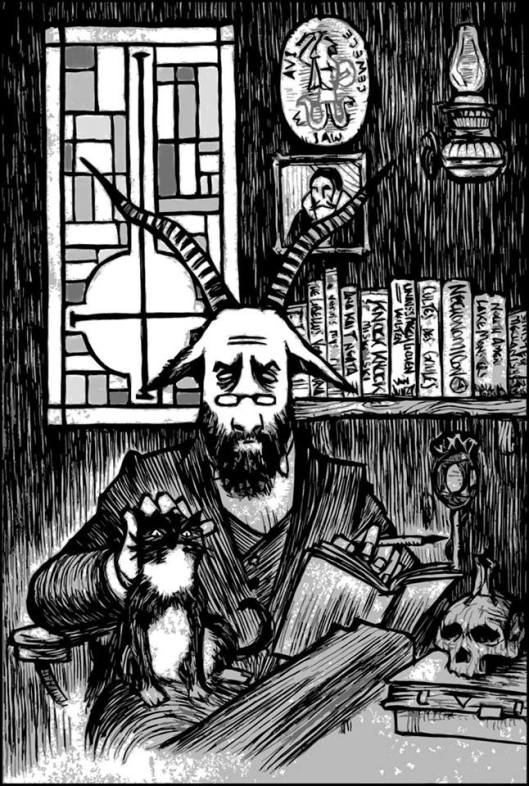 Business card portrait of yours truly by Yves Tourigny

Album art by Michael Bukowski for an audio dramatization of Matthew M. Bartlett’s “Gateways to Abomination”

Illustration by Dave Felton for “My Mother’s Skin”